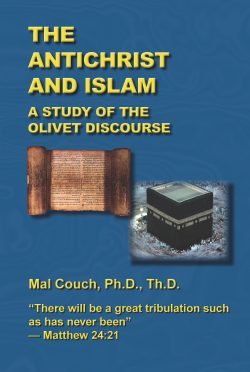 The Antichrist and Islam

A book on Biblical Prophecy and Islam by one of the foremost prophecy scholars of our day.

While the Arabs and Islam are not mentioned in the Olivet Discourse in Matthew 24, the antichrist is, and also the seven years of world-wide tribulation. But tying Matthew 24 together with Babylon the Harlot in Revelation 17-18 seems to indicate that the Muslims will be playing a major role in that terrible period of world history.

Recent research is suggesting that Mystery Babylon could be the Islamic religion, and that the city mentioned could be Mecca and the nation of Saudi Arabia. This author was moving in that direction in his thinking but it has recently been more confirmed by former Muslim Arab Walid Shoebat.

Could the Biblical Antichrist be the awaited “messiah” within Islam?
Could Islam be “Babylon the Harlot” as mentioned in Revelation 17-18?
Will Islam be the major players in the Tribulation?

Find out the answer to these questions and more in this timely book by Dr. Mal Couch.

THE ANTICHRIST AND ISLAM is a clarification and exposition of Matthew 24 and the issue of Babylon the Harlot. A most unusual hardback study for those interested in biblical prophecy.